If you're interested in buying books to supplement your Spanish studies, I've recommended some books from Amazon and there is a Spanish Interlinear book with literal English translations under the Spanish text.

Need more Spanish? Try the Spanish courses at Udemy, the audio and video lessons at SpanishPod101.com, and the authentic videos with subtitles and English translations at Yabla's LoMásTV and FluentU

Days of the Week

Months of the Year

To Come and to Go

To Take or Drink

To Want, Be Able to, Have to 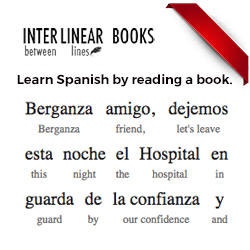 Parts of the Body

To Give and To Bring

To Hear, to Smell, to See

Uses of the Subjunctive

Only available in PDF e-book:

Uses of the Infinitive

Parts of a Car / Gas Station

Book Recommendations. Language textbooks are rather expensive and generally only include the formal, written language. You will need more exposure to the real spoken language if you want to be become fluent.

Please consider sending a donation of any amount to help support ielanguages.com. Thank you!

Return to top of page

FluentU offers authentic videos in French, Spanish, German, English, Chinese and Japanese. Learn from captions and translations and enjoy access to ALL languages!

Learn Spanish, French, German, Italian, Mandarin Chinese and English with authentic videos by Yabla that include subtitles and translations.

Learn to read languages with interlinear bilingual books that include the original language and an English translation below in a smaller font.

Hundreds of free and paid online language learning video courses at Udemy. By native speakers and experts, from Arabic to Zulu.